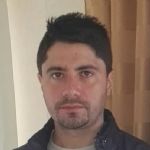 Riccardo Miscioscia was born in 1977. He received the M. Eng. degree in Electronics Engineering from the University of Naples “Federico II” in 2003 with a thesis in the field of annotated video-databases. He received the Ph.D. degree in Information Engineering at the department of Electrical and Electronic Engineering, University of Salerno with a thesis on the role of the dielectrics and their interfaces in the performances of Organic Thin-Film Transistors. He joined the Nanomaterials and Device Technologies Section at ENEA in October 2005 as a temporary researcher. He has been involved in the fabrication and characterization of organic devices, mainly  thin-film transistors, organic electroluminescent devices and on patterning by photolithography processes on active matrix display backplanes. He continued from 2010 to 2012 his research in the design, implementation and testing of electronic scaling devices and their monitoring tools as a software/firmware engineer for  a private Company. After this period he also had freelance experiences in the field o fembedded systems design, administrator in  e-learning management, experience as a J2EE Software Developer and as Application Server Administrator. In 2012 he rejoined ENEA at the Laboratory for Nanomaterials and Devices in Portici working on OTFTs electro-optical characterizations, interface circuits, hot-embossing processes, memristive devices characterizations and modeling and electrical characterization of recycled materials.  Nowadays, he is working on the design and characterization of organic devices and sensible RFID transponders and interface systems for food quality and safety applications