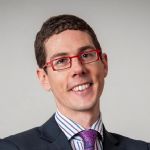 Role in the project : Acceleration of innovations’ implementation

Prior to joining SolarPower Europe in 2010, Alexandre holds various positions at the French Permanent Representation to the European Union, as deputy counselor in charge of energy and as assistant to the counselor in charge of nuclear affairs. During this period, he has been involved in the negotiation team of major pieces of European legislation relevant to the energy sector, and in particular the Renewable Energy Directive.

Mr. Roesch graduated from the Institut d’Etudes Politiques (Strasbourg) and holds a Master Degree in Environmental Law and Management